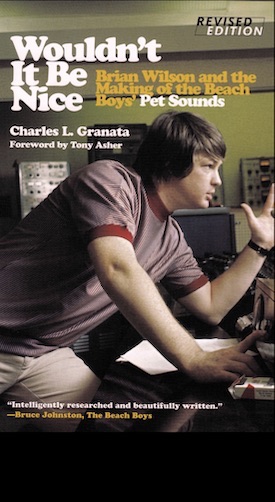 “GRANATA’S book is a simple masterpiece that does justice to the album, dissecting clearly all the complex factors involved…”
– Q Magazine

“As a musician who was there at the creation, I can assure you that this is the book to read if you want to understand Brian Wilson and the making of Pet Sounds. Chuck Granata has deftly painted this monumental story with the respect, passion and vibrancy of his subject’s greatest music.”
– Carol Kaye, Pet Sounds bassist

It’s been called THE Number One album in pop music history, and is a favorite of Paul McCartney and Eric Clapton. Fifty years after its release, Brian Wilson’s enigmatic masterpiece PET SOUNDS has garnered renewed attention and accolades from all corners of the world. In honor of this special occassion, Chicago Review Press is issuing a REVISED, EXPANDED edition of the definitive study of how Brian Wilson conceived, wrote, recorded and produced the album that confirmed his genius: Wouldn’t It Be Nice: Brian Wilson and the Making of the Beach Boys’ Pet Sounds. Filled with fascinating personal insight from those who aided Brian as he worked, Wouldn’t It Be Nice places the reader on the piano bench and in the recording studio for an inside glimpse into the creation. Included is revealing commentary and analysis from a host of music industry luminaries, including legendary songwriter Jimmy Webb, Grammy-winning pop producer Rob Fusari, the Beach Boys, and the album’s brilliant session players! A MUST READ…