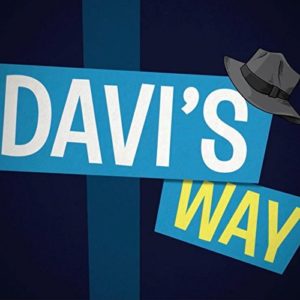 The results are unpredictable, poignant, and sometimes comedic, but from start to finish, he did it Davi’s Way.

I guess it’s natural to be excited about a film produced by a friend – especially if you make an appearance in said film. And, given the personal nature of such a situation, it’s unlikely that any “review” of the final product wouldn’t be subtly colored by that friendship, and the flattery of being asked to participate.

Yes: Robert Davi is my friend. And yes: I do make a brief appearance in his recent film Davi’s Way: a documentary detailing his valiant attempt to pay homage to one of his mentors – Frank Sinatra – by mounting an ambitious recreation of the icon’s landmark 1974 concert The Main Event, held at New York’s Madison Square Garden.

However, you’ve got to trust me: what you’re about to read is the gospel truth. Despite our friendship (and the honor of inclusion), it’s 100% objective. After screening Davi’s Way with the director and a group of invited friends (including A Bronx Tale legend Chazz Palminteri – who also pops up in the film), I came away with these thoughts: Davi’s documentary is authentic, honest and poignant. It was crafted with tremendous affection for its subject, and reflects the influence that Sinatra has had on the actor (as Davi points out in the film, he owes his acting career to The Chairman, who insisted that Davi be given a role in his NBC TV feature Contract on Cherry Street back in 1977.)

Some back-story is in order.

Davi – one of Hollywood’s truly magnificent “bad men” – grew up in an Italian household where music (opera, and Sinatra specifically) was omnipresent.

With a penchant for acting, he majored in drama at Hofstra University, and then went to Manhattan where he attended Stella Adler’s Theater Studio and was invited to audition for the fabled Actors Studio (where he studied under Lee Strasberg and is now a lifetime member.) This training was crucial. It was Adler – an important mentor – who encouraged Davi to pursue serious stage acting; he performed in over 1,000 productions, honing his skills on the works of Shakespeare and other classic playwrights. At the same time, he indulged his passion for opera by seeking out the best vocal coaches to help him train his voice.

Although he’d never auditioned for a film, Davi sought a part in Sinatra’s Cherry Street, but was too late: all the parts had been cast. He persisted – and it paid off. After physically wedging himself into the cramped casting office for the film, he came to Sinatra’s attention and got the role and the start of his lucrative film career.

Since then, Davi has appeared in a number of legendary and enduring movies: The Goonies (as the nefarious, opera-singing Jake Fratelli); the James Bond epic License to Kill (Franz Sanchecz); Die Hard (Special Agent ‘Big Johnson’) and Expendables 3 (where he joins an all-star cast, including Arnold Schwarzenegger and Sylvester Stallone.) If you don’t recognize the Davi name, Google him: anyone who’s been remotely conscious during the last thirty years will definitely know that face.

In 2011, hit making producer Phil Ramone heard a demo Davi recorded at Capitol Records, and offered to supervise the creation of Davi’s first album, Davi Sings Sinatra: On the Road to Romance. The tribute rose to #6 on Billboard’s Top 10 jazz chart, and Davi…well, hit the road, bringing his live show to audiences across the country and around the world (who knew Sinatra was such a fan fave in Croatia and Estonia?)

On to the film, which was the brainchild of actor-producer Danny A. Abeckaser, who conceived it after seeing Davi perform in front of 14,000 people. Abeckaser financed the movie and brought in director Tom Donahue and the team at Creative Chaos: a production company known for their award-winning documentaries.

Surprisingly, Davi’s Way is far less about Sinatra or Davi per se, and much more about fulfilling one’s creative goals – not matter how farfetched. Hint: expect the unexpected.

Instead of being Sinatra-centric, the story elegantly touches on and acknowledges his greatness and significance in Davi’s life. At the same time, Davi himself – his ego, specifically – takes a backseat to the process of conceiving, planning, funding and executing a formidable entertainment event: a modern-day reprise of the October night in ’74 when Sinatra’s Main Event concert was broadcast to the masses on ABC TV. Produced by Jerry Weintraub (the man who turned Sinatra, John Denver and scads of other middle-of-the-road artists into concert arena stars) the special helped bring Sinatra out of retirement and thrust him back into the spotlight. It remains one of the landmarks in his lengthy career.

Throughout the film, Davi reveals much of the genuine man he himself is: thoughtful, appreciative, articulate, demanding and just a little insane (aren’t we all?) There’s no artifice here: these are qualities I’ve witnessed myself, while spending time with the actor: at events, at his home in Hollywood, backstage (and onstage) during his concerts, at casual dinners in New York and L.A. and during dozens of late-night phone conversations. With Robert Davi, what you see is what you get, and in my experience what you get is honesty. Like it or not, Davi says what he feels and backs it with supporting reasons. It’s one of the very characteristics that have endeared him to me.

In Davi’s Way, the actor is a “rebel with a dream,” – a man who’s determined to see his grand vision come to fruition. While the dream ultimately emerges without a scintilla of the grandeur, pomp and circumstance of the original Sinatra event, Davi’s honesty – about his life, ambitions, focus and direction – takes center stage.

Where others might push a failure aside and refuse to discuss it, Davi embraces it and pushes it in the comedic direction. Much unlike the actor’s original intent, Davi’s Way becomes a wild, wacky comedy filled with real-life power players, aspiring actors, technical, financial and logistical miscues, cringe-worthy pratfalls and – most of all – a sensational (and refreshingly) self-deprecating star. Who, other than a guy with as menacing a look as Davi’s, could get away with poking fun at himself?

Davi’s Way offers a glimpse of the absurd contradictions and politics in Hollywood and the music business, and leaves you with a real fondness for Davi and the cast of characters who persevered through the insanity of his elusive journey into Sinatraland. Funny, entertaining and highly recommended!

Wanna know what Frank Sinatra was really like, and one of the reasons why Davi adores him? In the film, he recounts a story about something Sinatra did after location shooting for Contract on Cherry Street wrapped one night.

While chatting with Sinatra during the previous week, the young Davi had mentioned that he’d recently been fired from his job as a waiter at Café Fiorello: a Broadway institution. One night after the conversation, Sinatra approached Davi. “You hungry?” he asked. “We’re going to get something to eat, and have a few drinks. I want you to join me.”

Davi was astounded as Sinatra’s driver eased the car up Broadway to Lincoln Center, and then pulled up in front of Café Fiorello. The Sinatra party entered the restaurant – eliciting incredulous stares from Davi’s former employers, I’m sure – and spent a couple of hours holding court. Not a word was spoken, but the thoughtful gesture had the desired effect – and spoke mountains to Davi.